Photo by richi choraria on Pexels.com

As they delve into the 10 virtues,

“The first and most important of the 10 is forgiveness or Uttam Kshama.”

“Like when I say sorry to Nihir after taking his things.” quips Nitali.

“Partly, Nitali… it is ‘authentic forgiveness’, that is given with humility, and no anger.” replies Ba, patiently.

Before he became a tirthankar, Rishabhnath was the ruler of a vast Kingdom. He had 2 wives: Sumangala and Sunanda. He had many sons with Sumangala, the eldest was Bharat and a daughter, Brahmi. He had one son with Sunanda, Bahubali and one daughter, Sundari. After his renunciation of family life, both his daughters and most of his sons renounced worldly life and became his disciples.

Bharat, after whom the country of India is named, claimed the kingdoms, surrendered to him by his brothers. He also claimed other minor kingdoms around capital city of Vinita, later named Ayodhya. He then turned his attention to the kingdom of his brother Bahubali in South India.

Bahubali does not concede his kingdom. Both armies were geared to go to war and had they gone to war, there would have been a lot of bloodshed. But advisors to both kings  determined that this was between the two brothers and suggested for them to engage in a duel and for the winner to take all. Both brothers agreed to the duel in the interest of averting blood shed.

Bahubali wins the duel. Bharat breaks the rules of duel in a desire to win, and Bahubali, in a fit of anger towards Bharat for not following the rules, is about to smash Bharat to death. In that moment, Bahubali realizes that he wants to kill his brother for the same worldly things that his father had renounced. Bharat asks for forgiveness, and Bahubali forgives his brother and immediately renounces the worldly life and goes into meditation.

Bharat thus comes to become the ruler of the entire country and is declared Chakravartin a. k. a. ideal universal ruler.

“Ba, what happens to Bahubali?” 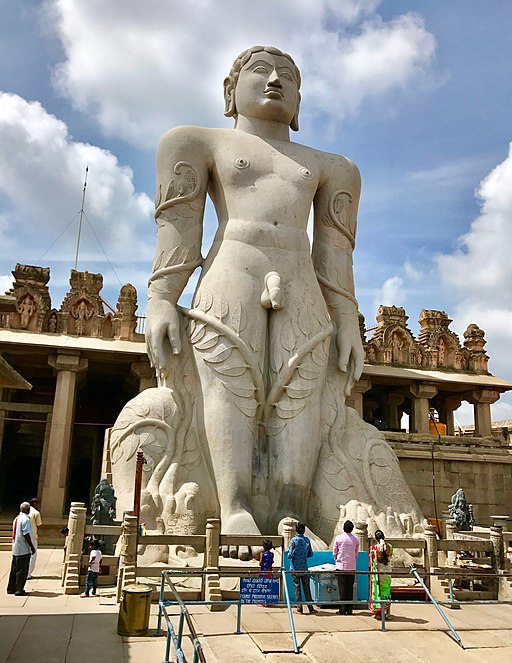 “After a year of meditation in Kayotsarg pose, he attains keval gyan a.k.a. omniscience. He later attains Moksha a.k.a. liberation from cycles of life and birth. He is the first digambar monk to attain Moksha in the current time cycle.”

“Ba, Veer says he is going to Shravanbelagola in Karnataka for Spring break to see a monolithic statue of Bahubali.”

“Shravanbelagola has the biggest monolithic statue in the world. It is one of Bahubali when he is meditating. It was commissioned by the minister of the Ganga dynasty in 981 CE and took 12 years to complete. Every 12 years, there is a Maha Masta Abhishek a.k.a. anointment of the statue.”