Pav bhaji is Mumbai street food. It is Bhaji a.k.a. mashed vegetables prepared in special spice, served with bread a.k.a. pav. Eat one and you will beg for more. If you live in the Bay area, you can go to the Pav Bhaji Hut.

I ate it with friends at the restaurant across from Lokmanya Tilak Medical College, after a harrowing day at the Medical school. It was hot and ‘Oh so spicy’  that I always had it with a cold fresh watermelon juice or Ganga Jamuna [ a mix of orange and sweet lime juice/ Valencia orange as they are called in the USA]. I topped it with fresh raw onions and fresh lemon juice. It was finger licking good! 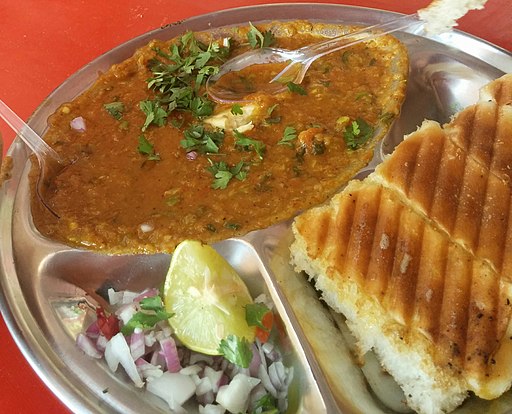 This is one recipe in which I will not skimp on the butter. To make the bread spicy use garlic chutney [ garlic with red chills and salt]. The spice mix I use is “Badshah Pav Bhaji masala”. There are many other brands but this produces a taste closest to the real Mumbai Pav Bhaji and the secret is that it is not overly cinnamony. The second best is Everest Pav Bhaji masala. Check your local Indian store or Amazon for these. Always squeeze some fresh lemon before serving!

Having said this, I make it in my I pot with frozen vegetables on a super busy day or steam each individual vegetable separately on a real slow day.

Other variations to eating this :

Pav bhaji Naan Pizza. For this is put pizza sauce on the frozen naan, then pav bhaji, then cheese then raw, chopped onions with cilantro and jalapeños. It is super yummy.

I get the Trader Joe one, and was perfect. I tried it on the garlic one from TJ’s, I would not do it again.

Pav Bhaji in a cone: make a tortilla or use  a store bought uncooked one, cut it in half, spread the tortilla on a foil mold and bake. Once it is crisp, fill it with Pav bhaji. An easy way to do this is to buy a waffle cone and fill it with pav bhaji.

Pav Bhaji Dosa or uttapam: spread it on a rice and lentil crepe, recipe here and here, Ta da…. we have pav bhaji dosa….

Pav bhaji Calzone/ Pocket: make a tortilla, put pizza sauce on half of it, then spread cheese and pav bhaji and raw onions and jalapeños and cilantro on it. Bake it in the oven.

Is it healthy to eat Pav? Pav is made with white flour. By now, white flour has been vilified enough to scare the masses off this delicious bread. Little do they realize, white bread if is made by fermentation has low glycemic index meaning raises the blood sugar not so much. So how do you know whether it is by fermentation or not: it has very few ingredients and most importantly no yeast! Using spelt flour and fermentation yields healthy bread with good bacteria for the flora of your gut and your gut controls how you feel.

Here is a recipe for sourdough whole spelt bread, I made enough for a loaf and just baked it as dinner rolls to eat with pav bhaji. Remember spelt is an ancient wheat variety and is not gluten free, just less gluten than wheat also lower in FODMAPS than wheat, not more than 3 slices in a meal though.

There are many ways to enjoy a good pav: check here.

Update: here is a great recipe for Middle Eastern Sloppy Joe with Eggplant, try it and keep me posted